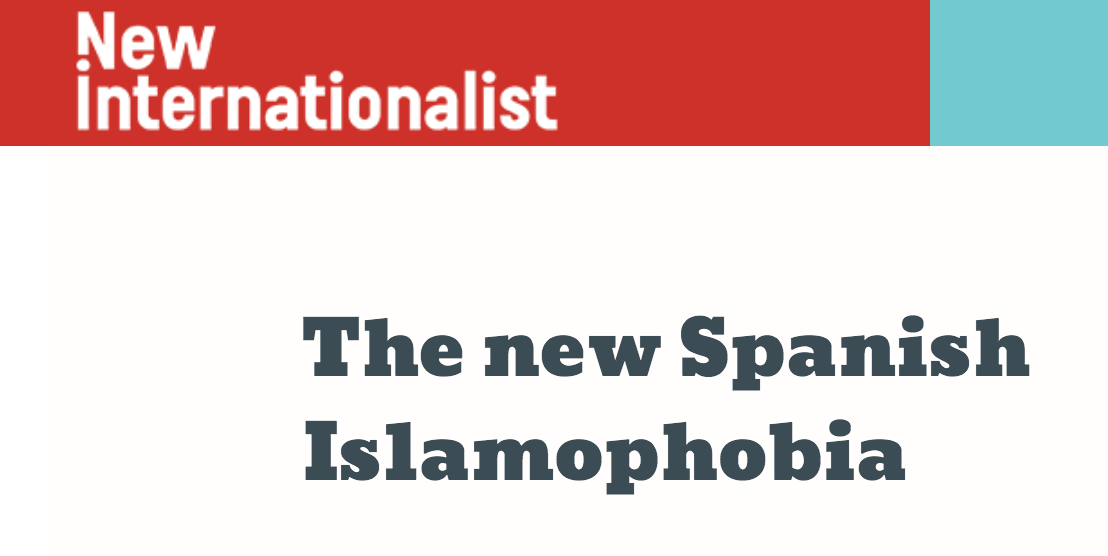 Published by The New Internationalist

Tanned, muscular men ride stallions across a rural landscape. Plaintive piano plays in the background. Where are these men? The title of Vox’s political campaign video tells you: ‘The Reconquista will begin in the lands of Andalusia’.

This controversial slogan is part of a strategy that helped secure the rising far-right party twelve seats in Andalusia’s regional election last year. Next week, Vox are one of five main contenders in Spain’s general elections, signalling the party’s unanticipated growth. It is expected to receive 29-37 per cent of the vote.

The Reconquista, meaning the ‘reconquering’, draws on the history of the Iberian Christian conquest of Muslim Spain, which ended in 1492. Vox’s proposed political reforms make the relevance of this history clear: if elected, the party claims it will deliver an end to supposed uncurbed migration, placate the ‘threat’ to Spain’s national identity from the growth of Islam, end state-funded abortion and repeal gay marriage laws.

Spectres of the past

The history of medieval Christian-Muslim conflict forms this far-right party’s repertoire of symbolism. For eight centuries, Spain was governed by Islamic rulers, known as the Moors. In 711 CE, the governing Umayyad dynasty travelled from Syria to Spain and eventually conquered the then Visigothic lands, renaming them ‘al-Andalus’. Contemporary Spain is replete with vestiges of this past, from Moorish architecture to the many Arabic-origin words in the Spanish language.

With the end of the Reconquista in 1492, a Spanish national identity began to emerge. The newly reigning Catholic monarchs took violent measures to forge it. Those who were not Catholic would not be considered Spanish in this new social order. This process would eventually lead to the expulsion of the peninsula’s vast Jewish and Muslim populations.

Spanish ethno-nationalism continued well into the 20th century. Spain’s former dictator, General Franco, granted the Catholic Church immense power, prohibited any religion save Catholicism and enforced the standardisation of ‘core’ Spanish culture, from the Castilian language to bullfighting. Francoist Spanish nationalism was defined against the nation’s former Jewish and Muslim subjects, such as through the dictator’s heavy use of Spanish Reconquista symbolism in his propaganda. Francoist rhetoric even blended the myth of the ever-present ‘Moorish threat’ to Spain with the ‘menace’ of Eastern European communism.

With the death of Franco in 1975, Spain officially disbanded its explicitly authoritarian structure. However, its ethno-nationalist past still haunts the public sphere.

Moroccans are Spain’s second largest minority. Many within Spain’s Moroccan community are ancestrally related to Spain’s historic Muslim population. At a market in Cordoba, pejoratively called ‘Morro’s Mercado’ by locals, Tariq, a Moroccan vendor tells me about the strong anti-Muslim prejudice he recognises in Andalusia: ‘They think in Morocco there are only camels and the desert,’ he says. Beyond the perception of Morocco as an excessively ‘backwards’ country, some Spaniards even perceive the influx of Moroccan immigrants to Spain since the 1970s as posing a ‘re-Islamization’ of the country.

Outside more blatantly Islamophobic cases, there are Spanish traditions which revisit this Christian-Muslim schism. Each year on 2 January, individuals across Spain dress as either ‘Moros’ or ‘Christianos’ and re-enact the last battle of the Reconquista, where the medieval stereotypes of the Moors as violent and religiously fanatic are inflated through carnivalesque caricatures.

Acceptable in the mainstream

Appeals to the Reconquista are not a new development in Spanish politics. In an attempt to drum up support for the Iraq War, José Aznar, Spain’s former Conservative prime minister, explicitly linked the medieval Moors to al-Qaeda. He stated in 2004 that ‘the problem of Spain with al-Qaeda began with the invasion of the Moors’, who were repelled thanks to the ‘successful Reconquista’.

Vox is building on this rhetoric. The party’s leader, Santiago Abascal, petitioned for Andalusia’s regional day to celebrate the conclusion of the Reconquista in 1492. At a meeting in Seville, Abascal stated that he wanted the ‘Andalusia of the Catholic Monarchs against that of Blas Infante’. Infante was a libertarian socialist writer known as the father of Andalusian nationalism. In the early 20th century, he strived to turn Spain’s legacy of medieval Jewish, Muslim and Christian co-existence into a contemporary reality.

The language used in the party’s political speeches is rife with Islamophobia. Vox’s secretary general, Javier Ortega Smith, stated in 2016 that ‘the enemy of Europe is called the Islamist invasion’. Santiago Abascal, Vox’s leader, rejoined Smith by stating that Spain’s Muslim community will become a ‘problem’ in an interview last year. The party’s proposed political reforms include banning both Islamic education and halal food in Spanish state schools.

This is all part of a Europe-wide phenomenon. In the week following the New Zealand/Aotearoa mosque shootings on 15 March, the number of anti-Muslim hate crimes reported across Britain increased by 593 per cent. These attacked are fuelled by continent-wide stereotypes, from the perception of Muslims as jihadists to perceiving Muslim immigrants as an unassailable threat to Western values.

Vox’s anti-Muslim stance have helped win the party favour with Europe’s largest far-right political groups. In 2017, Abascal claimed an affinity with France’s ultra-conservative Marine Le Pen for their mutual protection of ‘Christian Europe’. Le Pen, along with the Netherland’s far-right Geert Wilders, have openly supported Vox through expressing hopes that the party will gain seats in May’s European parliamentary elections. The growing coordination between Europe’s far-right parties only threatens to strengthen the institutional legs of a continent-wide Islamophobia.